Why Don't We Stutter When Talking Alone?

The study included 1485 Russian speakers and 171 English speakers. In this rather large scale study, the results were quite consistent as around 65.67% of the Russian speakers did not stutter when they spoke alone inside a room or read out loud to themselves either.

We Don’t Stutter When Alone: What Drives Stuttering in Social Situations?

It simply reiterates what many of us who stutter already know – we speak without any disfluency when we are not around people. However, the moment we step outside, whether to go for a movie, to a restaurant to meet friends or enter a family gathering, our stuttering keeps us from expressing ourselves freely.

At least two important questions can arise from this phenomenon –

A recently published study shows that the perception or feeling of being heard plays a significant role in the speech fluency of a speaker who stutters.

Researchers have dubbed this the “talk alone effect.” PWS who believe that they don’t have an audience do not stutter during private speech. Private speech can be when they are talking to themselves in their room, or reading aloud to themselves.

Several anecdotal reports have presented this phenomenon, but this is the first time that a team of NYU researchers have provided evidence for the “talk alone effect.”

During this particular study led by NYU Steinhardt Professor Eric S. Jackson, participants were left alone with a task on the computer which primed the environment for private speech. Researchers also told the participants that people who talk to themselves during the task tend to perform well, and that no one would be listening to them at all.

As compared to other speech conditions like conversations and reading, the participants did not stutter while “talking alone.”

Why Do We Stutter In Front Of Others?

Similarly, your child may be stuttering in school, but not as much when at home.

Stuttering is a combination of physical and physiological factors. Therefore, decoding the reasons for not stuttering in certain situations is not as easy as you might want them to be.

One of the most common reasons behind this phenomenon is that when talking to the self, you are more relaxed. You don’t have to think about how people will perceive or judge you. Speech disfluencies are more common in stressful situations. While non-stutterers might think that stressful situations only include job interviews and examinations, but for people who stutter, simple social interactions can be stressful as well. 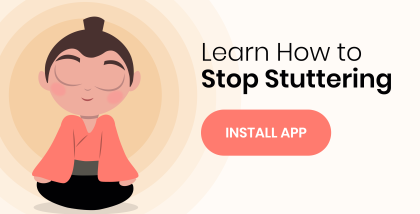 Why Is Producing Fluent Speech Not As Easy As People Make It Out To Be?

Speech is always about expressing oneself.

It has two distinct components – verbal (the words) and non-verbal (mood, attitude, feelings, and emotions).

Conveying how you feel is a huge part of the communication process. One could say that these emotions occlude the word selection and speech production process in those who stutter.

As we have discussed earlier, people who stutter have significantly different brain structure.

According to Dr Barry Guitar, and several other researchers, in the case of people who stutter, nerve fibres in the left hemisphere of their brain can’t conduct impulses along the nerve bundle.

It makes speech processing and production a rather slower process as compared to people who don’t stutter. The right hemisphere of the brain is the location of emotions including fear and anxiety, which dominates the surrounding neural connections.

Why Can’t We Pretend To Be Alone While Talking In Front Of Others?

An adult or a child can stutter less, more, or not at all, depending on the stress level he or she experiences. In an environment where the person who stutters is confident and comfortable, they will stutter less or not at all. These situations can include home for some, singing classes for some, and an animal shelter for others.

Brain imaging studies show that when people are relaxed more, they stutter less. However, contrary to this theory, people who stutter, often state that the more they try to relax forcefully, the more tense or anxious they become. It is like a vicious cycle, which even some children cannot escape.

Therefore, extrapolating the emotions and feelings that enable fluent speech at home to public situations isn’t easy at all.

How Can We Find The Fluency In Our Stuttering?

This is where the role of a speech therapist becomes indispensable. For children, typically, speech therapy is more effective than in the case of adults.

In the case of adults, speech therapy often requires the support of cognitive behavioural therapy for addressing the negative attitudes that accompany their speech disfluency.

Getting rid of stuttering is not a one-day task.

While you may be able to speak fluently or almost fluently in front of a mirror, or while reading out aloud or while singing along with your favourite singer, you need to kindle and preserve the same level of comfort, and confidence while talking to real people in the real world.

The first step towards overcoming your fear, embarrassment and/or anxiety of stuttering is by embracing your stutter.

Accept that you might stutter while talking to a person or in a group.

Next, accept the fact that stuttering does not make you less important or any less capable than your peers. Once you learn how to stutter confidently (and maybe with some swag too), you will automatically find yourself stuttering less and less every day with continued therapy and practice.

June 9, 2021
Why Don't I Stutter When I Can't Hear Myself Speak?
By Team Stamurai
Information

September 6, 2020
How Can Stamurai – an App to Stop Stuttering - Help You?
By Team Stamurai
Information

April 28, 2022
Speech Therapy: How Siblings Can Help at Home
By Team Stamurai